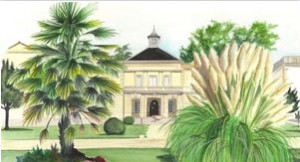 During the winter of 1942-1943, the occupying forces requisitioned the summer camp of the Coqs Rouges in Brameloup, La Teste. Local officials were seeking a replacement for the camp, believing it should continue to function. The Abbot of Traversav located the domain of La ​​Sauque, in La Brède, vacant since the death of its owner, Arthur de Richemont. During the war the area hosted elderly refugees. On February 2, 1943, two leaders of the Coqs Rouges, the Abbot of Traversay and Joseph Gramont, visit the site. The grounds are rented. Paul Coussau set up a wooden outhouse. The gallery of the chateau, at the time covered in mirrors (“galerie des glaces!”) was used as a refectory.
The camp operates during the Easter holidays and during summer. In August 1943, the authorities require that children be kept at La Sauque, because of the risk of bombing in Bordeaux. On October 18, 1943, La Sauque became an “Evacuee school” (Centre Scolaire de Repliement) with 25 students. Two “Coqs Rouges”, André Bord and Georges Lejeunes, also teachers, are assigned to La Sauque, helped by others, including Louis Anceau. In June 1944, there were 150 students. In the summer of 1944, La Sauque once again hosted the summer camp, which continued to operate until 1983, under the responsibility of Ms. Tremel, Bernard Saudout, Miss Michon, Jean-Louis Faure and Jean-Pierre Ducournau.

Abbot Guilgault, director of the Coqs Rouges, saw in the founding of this school an act of Providence towards extending the educational work of the patronage. He died on 3rd of March 1945 and Abbot Soncarrieu (who passed away in 1953) continued his work, which was then taken over by Father Georges Lavergne.
Meanwhile, the property was purchased on January 8, 1945 by the Bordeaux Summer Camp Committee, (CVBSO – Comité des Colonies de Vacances de Bordeaux et du Sud-ouest), a branch of the Coqs Rouges. This purchase was made possible by donations collected by Abbot Guilgault, with a loan from the Traversay family, and a loan from the Archdiocese. It was during 1945 that Gerard Causse, Robert Lantié, Bernard Saudout and Miss Tremel arrived at la Sauque.

No one in the diocese will be surprised that we pay tribute here to the Abbot Guilgault, so suddenly called back to God between the 3rd and 4th of March 1945, no-one can fail to recognize the spiritual impact this excellent priest had upon part of the youth of Bordeaux.
The funeral Mass with hundreds of communions; collective prayers continuously recited for three days and three nights around his coffin; the emotional crowd following the body to the cemetery are unmistakable evidence of the affection people bore him. Indeed, so many young families and young people owe him their preserved or renewed faith!
How many vocations found in him the strengthening, or rectitude they needed? God only knows! Our dear Father truly gave himself entirely to Christ and to the souls of Men. He was a “consumed man” in the words of Father Chevrier, with whom he shared more than a passing resemblance.

The apostolic spirit had always animated him, but restrained by family obligations, he only entered the Grand Seminary after the war; he was only ordained at the age of 39 years. Providence had thus prepared him for the twenty years of fruitful ministry that it had intended for him. Familiar with the concerns of young people, especially young people of the working classes, his thoughts were always directed towards a thorough religious education, which was responsive to their needs. The many study circles he presided each week as well as the retreats and recollections that he ran on a regular basis, kept him in touch with the intellectual and moral concerns of youth.

His general knowledge, always well-maintained, his deep meditation upon the Gospel and St. Paul, and his scientific and philosophical knowledge addressing contemporary concerns all allowed him to hold original and captivating meetings.

The passing of our Father 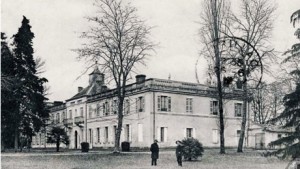 Easter 1943 – Brameloup is occupied by the Todt organisation. Yet the “Colos” are so vivid and so rich that the impossible must be done, to find premises. Providence intervenes, and shows us La Sauque.

A ​​56-hectare domain, it is located at the intersection of roads from Langon and La Brede, on the old Roman road. Its chateau is a bit run down, but the English style grounds, dotted with centenary firs, are fast transformed into football pitches and basketball and volleyball courts. The land offers plenty of other possibilites: farming, games in the woods, swimming in the neighbouring Saucats stream. The first field of potatoes is planted in anticipation of the large summer camp.

In the summer of 1943, the chateau is very small. Dependencies and two tents are used, while in the village of La Brede, 2.3 km away, the “Section des Petits” is sharing the premises of the “Joyeuse” and the schools with the Patrons amis d’Arlac et de Chantecler. We explore the country: Aiguemortes, the bridge of Beautiran, the “cottage of Pines” and the Chateau de Montesquieu, then the pool of Martillac, St. Morillon, St-Magne and lagoons.
During the “colo”, Our Lady of Boulogne, escorted by the Coqs Rouges from Beautiran to Bordeaux, passes through our lands, stopping for a while to bestow a blessing.

But the dangers of the big city, such as bombings and a lack of food, are getting worse. A ministerial circular, supported by a letter from the prefecture, asks us to keep the children during the school year. Through a fortuitous coincindence, several young people with university degrees find in La Sauque a welcome refuge from the forced labour groups. Our camp becomes an official evacuee school, dependent on the Ministry of the interior.

The satisfaction of everyone, especially parents, quickly leads to numerous admission requests. Lacking space, unfortunately we are forced to refuse many.
The big camp (“grande colo”) of 1944: Only with the advent of good weather and the prospect of an ever more dangerous Bordeaux, can we take in more youngsters. Chantecler and Arlac are still our neighbors, but this time in Ayguemortes, at the chateau of St. Jerome. Clo-Clo Bolzec regularly visits children housed in host families in the Lot-et-Garonne.
The notable events of this period are marked by the brutality of German repression.

A few days before they are massacred, the “martyrs of Saucats” come home to stock up on provisions and recoup. Some of them we know well: Roger Sabaté, Anere Lucien, Dietlin Dany. On the morning of the 14th of July, we hear the gunfire that cuts them down.

August 25: Four days ago, our elder Paul Coussau went to get food in Clairac (Lot-et-Garonne). We are worried for him because there has been fighting in the vicinity. On the day of St. Louis, we see the vanguard of the resistance on the road, searching for Germans fleeing towards Bordeaux. In the morning, as we used to do on Saints’ days, we hoist the colors. The abbot Guilgault instructs the hesitant monitor to say these words: “We recognize the power of the Holy Virgin in the fact that we will hear from Paul Coussau today.”

Alas, the day proceeds without any sign of Coussau. In the evening, at dusk, a child shouts out: “ Coussau is here!” And indeed, after many adventures, the “gazo” cloaked in the red, white and blue flag, brings a tired and unshaven Coussau up the alley of Chestnut trees… he is unharmed, and brings with him among other things, two hundred pounds of white bread, which many of us had forgotten the taste of. How eagerly we sang the Marseillaise that evening, at the lowering of the colours! What faith we had while saying an “Ave” in recognition of the holy mother!

The cessation of hostilities followed the “liberation”. In 1945, Brameloup reopens; the evacuee school ceases to exist. The students have grown, in any case: La Sauque becomes a secondary school. 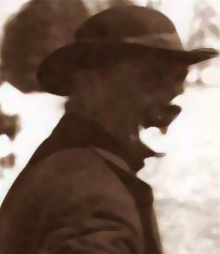 March 3, 1945: A date to remember! The Coqs Rouges see their father for the last time.

His health had been diminishing, his strength fading, for a long time. Gassed in the 1914-1918 war, he was living on one lung, and his heart had been affected. His last year was a miracle of God, his blood pressure varying between 27 and 29. At a time when his body was weak, when he could aspire to some deserved rest, his love for Jesus urged him instead to keep going forwards.

February 26 sees the start of his last week. He spends the first few days at La Brede, and then returns to Bordeaux on Wednesday, very tired. He resumes his activities with his son as if nothing out of the ordinary is going on. Wednesday through Saturday, meetings and retreats will follow one after the other at the usual rate. On Friday night he has meeting with the “Grands”. On Saturday morning he says Mass at the parish in memory of Guy Dumail, a Coq lost to the war. He has great difficulty completing the service, and can barely pronounce the absolution.

The day continues, exhausting him. His sons come to his office in quick succession, as usual, either for spiritual guidance or confessions, and abbot Maussion, of the “Union des Oevures” barely has time to get a few words in through the half-opened office door. “See you Sunday morning, we will have more time.” Evening comes, the day ends, the Father confesses the “Joyeux-Unis” in recollection until about 8.15 pm. He then makes his way home, not without difficulty, to take his last and meager supper – he feels so oppressed that he has not the strength to eat.

Indeed, that evening, he will not direct the recollection to the “Moyens”. He wants to save his strength for the next day, Sunday; he wants to hold on until the very end. This is why he asks abbot Maussion, who attended the to speak for him.
“Of course! What kind?”
“Preparation for Easter.”
“Very well.”
“You are doing me a great favour, because…”

He does not finish and leaves immediately, averting his gaze from one of his anxious sons. But everyone understands. The abbot has reached the end. He returns to his room at the rectory. We were never again to see him alive.